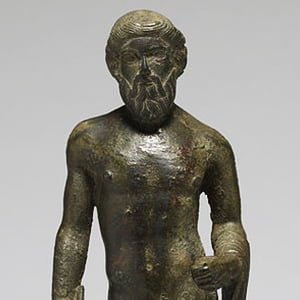 The ancient Olympic Games were a series of athletic festivals held in honor of Zeus, king of the Greek mythological deities. The games were originally held in Olympia as early as the 776 BC, though later in its history it was hosted in several different cities under the same name. These festivals were typically appended with the name of the location, such as the “Olympic Games at Athens” or “Olympic Games at Antioch.”

These games held significant cultural and religious importance within Greek culture. Sacrifices to Greek mythological deities were made both before and during the celebrations in an effort to seek favor with the gods. Athletes who won Olympic titles brought great honor both to themselves and their home city-state. Spectators would travel from all over the Mesopotamian region to watch these competitions, as they were a central icon of Greek culture.

The athletic portion of the festival originally consisted of one sprinting event, though other events were added later on. The full list of events, ordered by their introduction to the Olympic Games, is as follows:

Though the athletes originally wore loincloths, over time all clothing was phased out in preference for stark nudity (called gymnos), as the festival involved celebration of the human body. Some evidence suggests participants even applied olive oil cosmetically to increase their aesthetic appeal, in part.

The ancient Olympic Games were one of the four Panhellenic games, the other three being the Pythian Games, Nemean Games, and Isthmian Games. These three all began later on in the 6th century BC. Each of the four athletic festivals were celebrated every two to four years, arranged so that at least one festival would take place every year. The Olympic and Nemean Games were held in honor of Zeus, the Pythian Games in honor of Apollo, and the Isthmian Games in honor of Poseidon (though originally Melicertes).

The earliest recorded instance of the ancient Olympic Games was in 776 BC, though the festival is thought to predate even that period. The games flourished in popularity throughout the following centuries until they were suppressed by Roman Emperor Theodosius in 393 AD, although they were still held for a short time afterwards. From the 1st to 4th centuries AD, Olympic festivals were intermittently held in other cities including Athens, Antioch, and Ephesus.

The most probable date for the final instance of the ancient Olympic Games at Olympia (as opposed to the other cities) was around 360 AD. The latest probable instance of an Olympic festival held elsewhere was in Antioch around 520 AD.

For most of the festival’s history, hopeful athletes had to be Greek-born men from any city-state. (Women competed in the Heraean Games.) In the festival’s very late life, some non-Greek men were allowed to compete, such as the Persian king Varazdat and Egyptian philosopher Horus.

Competitors had to recite a ritualistic vow that they had trained for at least 10 months, had adhered to a special athletic diet, and would not cheat in the upcoming events. Athletes from various city-states had different rituals before the ancient Olympic Games, such as sacrificing or praying to certain deities, ancestors, or athletes at specific points on the journey to the festival.

An ekecheiria (truce) among all Greek city-states was put into place immediately before and during the ancient Olympic Games to ensure athletes and spectators from different regions safe travel. During this time, battles and wars were to be halted, no new conflicts were to be declared, and death penalties were to be ignored. Any city-states who violated these terms were heavily fined. For example, when Spartans allegedly assaulted an Elean fort during the Olympic truce around 432 BC, they were fined 2,000 minae, the equivalent of $16 to $18 million USD.*

*60 minae converted to 1 talent in ancient Greece, and 1000 talents at that time would have equaled roughly $450 to $500 million USD in 2010. With these estimated currency conversions and with adjustments for inflation, 2,000 minae comes to about $16 to $18 million USD.