Shankhpushpi is the name given to a class of herbs used in Ayurvedic medicine in ancient India. Although the term has been used for four different plant species throughout India,1An update on Shankhpushpi, a cognition-boosting Ayurvedic medicine. within the scientific community and supplement industry, shankhpushpi most commonly refers to the plant convolvulus pluricaulis.2Nootropic, anxiolytic and CNS-depressant studies on different plant sources of shankhpushpi

In ancient Ayurvedic medicine, shankhpushpi was used as a remedy for issues regarding the brain and nervous system. Practitioners would use a decoction (essentially a concentrated tea) in an attempt to treat anxiety, fatigue, memory loss, and more. 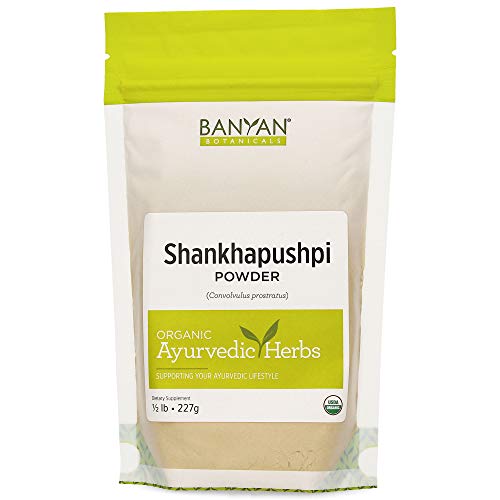 This is pure evolvus alsinoides powder, one of the four plants referred to as shankhpushpi. While it isn’t convolvulus pluricaulis, it is in the same convolvulus family, and bears many physical and chemical similarities to pluricaulis.

This shankhpushpi powder has a mildly leafy flavor with a chalky texture. It’s a great option for those who want to make smoothies or shakes with shankhpushpi.

And if you prefer to take capsules, using a capsule filling machine to fill empty gelatin capsules is a great way to make your own inexpensive shankhpushpi supplement. 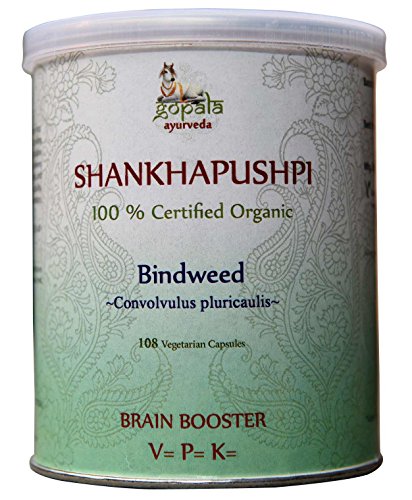 If you prefer to take capsules but don’t want to go to the trouble of making your own, these prepared shankhpushpi capsules are a great option.

Each capsule is filled with 100% convolvulus pluricaulis powder, with no filler. It’s one of the most popular shankhpushpi supplements on Amazon, making it any easy recommendation.

This means that while we do have some scientific insight into the the benefits of shankhpushpi, these findings need to be taken with a grain of salt. And with some Indian scientific journals even making concrete claims about shankhpushpi’s ability to cure diabetes, cardiovascular disease, poisoning, and more, extra caution should be taken.

With being said, several peer-reviewed studies, performed both in vitro (in a Petri dish) and in vivo (on animals—in this case, rats and mice), have demonstrated quite a few potential shankhpushpi benefits.

Again, many of these results are preliminary, needing much more research—particularly on human subjects.

Scopolamine, a medication used to treat motion sickness, is often used by researchers to safely induce amnesia in animal subjects. Researchers can administer scopolamine to rats alongside other substances to test their memory-improving effects. And using a popular brain-enhancing nootropic called paracetamol as a comparison, researchers have found that shankhpushpi may be effective.

Unfortunately, as with most research associated with shankhpushpi, these kinds of findings have yet to be replicated in human studies. While these early findings suggest that shankhpushpi may improve memory, further research is needed.

Early research has also found that shankhpushpi may help with reducing symptoms of depression. Several different dosages and testing methods have demonstrated these effects in animal subjects.11Nootropic, anxiolytic and CNS-depressant studies on different plant sources of shankhpushpi12SCREENING FOR ANTIDEPRESSANT-LIKE ACTIVITY OF CONVOLVULUS PLURICAULIS CHOISY IN MICE13An update on Ayurvedic herb Convolvulus pluricaulis Choisy14Effect of Shankhpushpi on Alcohol Addiction in Mice

As with any other findings associated with shankhpushpi, these results have yet to be replicated in human studies. While early data is promising, shankhpushpi’s benefits need to be confirmed in human trials before any concrete claims can be made about its ability to reduce symptoms of depression.

One notable study examined the effects of shankhpushpi on anxiety induced by alcohol withdrawal in rats.19Neuropharmacological Profile of Extracts of Aerial Parts of Convolvulus pluricaulis Choisy in Mice Model Using dosages of 100 milligrams and 200 milligrams of shankhpushpi per kilogram of bodyweight, researchers noted a significant reduction in anxiety using a test called the elevated plus maze.

Again, it’s very important to note that the anxiety-reducing effects of shankhpushpi have yet to be confirmed in human studies. While these findings from animal studies are promising, further research is needed to replicate these results in humans.

There is currently no officially recommended shankhpushpi dosage. This is largely due to the fact that human trials are still limited, so dosage ranges have yet to be tested.

There are several different dosage methods that were used by Ayurvedic physicians, however.

Ayurvedic physicians would also make shankhpushpi decoctions or teas, typically mixed with cumin and milk.22Traditional Indian Herbs Convolvulus pluricaulis and Its Medicinal Importance However, for most people, taking dried shankhpushpi powder would be a simpler solution.

However, shankhpushpi has been used in Ayurvedic medicine for centuries. Within these traditional medicinal practices throughout India, no significant side effects have been noted either.