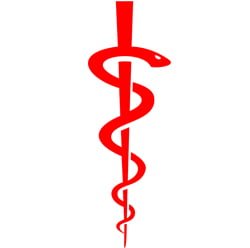 Many societies throughout history have designated certain images as medical symbols, often used in medicinal rituals or to invoke feelings of protection and care. Practitioners of ancient Egyptian medicine would often use snakes as a symbol of protection in their magical healthcare rituals. In modern times, internationally recognized symbols such as the red cross are used to identify medical services (for example, red cross first aid kits). These icons, in a wide variety of forms and origins, have aided the healthcare of humankind throughout its history.

Within ancient Egyptian culture, serpents often served as symbols of health, healing, and protection. For example, the mythological goddess Wadjet, depicted at different times as a cobra and as a woman with a cobra head, was the protector of Lower Egypt and all pharaohs, and often symbolized general protection and healing. Though these serpentine symbols in ancient Egyptian culture do not seem to be restricted to representations of health and protection, they are often associated.

A connection here can be seen in Hebrew culture within the Biblical book of Numbers, where Moses, while leading the Israelites from Egyptian captivity, crafts a snake made of bronze and sits it atop a pole. God tells him in the text that whenever anyone was bitten by a snake, they could look at the pole to be healed. Egyptian cultural influence likely played a key factor here, as the serpent used as a symbol of healing is not a repeated theme seen in Hebrew culture.

Within American culture, the Caduceus – the winged staff with two twisting snakes – is one of the most commonly used medical symbols. For example, Caduceus emblem pins are often used at medical school graduation ceremonies. However, its use today doesn’t align with its Greco-Roman origins. Its widespread presence in the West can be traced back to a misuse of the icon by the US Army beginning in the 19th century.

In ancient mythology, the Caduceus was wielded by several analogous deities within their respective cultures; Hermes in Greek mythology, Hermes Trismegistus in Greco-Egyptian mythology, and Mercury in Roman mythology. In every case, this serpentine staff represented negotiation and commerce; the two snakes symbolizing a balance in transactions. Within Egyptian and Greco-Roman culture, the Caduceus itself was not in any way considered a symbol of health or protection.

In the mid 19th century, the US Army began to use the image of the Caduceus on signage and uniforms of medical personnel. This was presumably due to a confusion between the Caduceus and the Rod of Asclepius, discussed below, the latter of which actually did serve as a health and medical symbol in Greco-Roman culture. This mistake went unnoticed and/or uncorrected for a long enough period that the Caduceus has come to be seen as a medical symbol only in the United States.

For further reading, refer to The golden wand of medicine: A history of the caduceus symbol in medicine by Walter J. Friedlander.

The Rod of Asclepius – Rod With One Twisting Serpent

The Rod of Asclepius – the plain staff with one snake entwined – is the true Greco-Roman medical symbol. Within Greek mythology, the staff was wielded by Asclepius, the god of healing and medicine. Whether the deity lent this symbolism to the staff or vice versa is uncertain.

The snake itself as a symbol of health and medicine likely has ties to Egyptian culture, as discussed above. Due to this symbolism, physicians in ancient Greece would use nonvenomous Aesculapian snakes (named after this mythological god) in healthcare rituals, often leaving them to slither the floors near sick patients.

The Red Cross, Crescent, and Crystal

The International Committee of the Red Cross has provided immeasurable humanitarian services since its establishment in the late 19th century. With over 17 million volunteers worldwide and nearly 200 countries with a society, its impact can’t be understated.

If you’d like to contribute, consider donating to the International Committee of the Red Cross or the American National Red Cross.

The red cross is one of the most internationally recognized medical symbols, used to identify nonpartisan medical services for victims of conflict regardless of race or military alignment. Medical services are often identified with a red cross flag. The origins of this symbol and the service it signifies lie with Swiss entrepreneur Jean Henri Dunant (1828–1910).

In 1859, Dunant witnessed the gory aftermath of the Battle of Solferino, fought between France and Sardinia, in which 40,000 were killed or injured. Seeing the masses of unattended wounded, he began work on an idea to solve this issue. In 1862, he published “A Memory of Solferino,” in which he described the event and proposed the need for a nonpartisan organization that would attend to the wounded regardless of military alignment. The following year, the Geneva Society for Public Welfare was founded to discuss such an idea (though the name was soon changed to International Committee for Relief to the Wounded).

In 1864, the first Geneva Convention, detailing the requirements for such relief organizations, was adopted by the US, Brazil, Mexico, and all of Europe. These organizations and their personnel needed to be easily identifiable, so a red cross on a white background was designated as the medical symbol to be used. As the symbol became increasingly recognizable internationally, the committee changed its name to the International Committee of the Red Cross in 1867.

During the Serbian–Ottoman and Russo-Turkish Wars from 1876 to 1878, the Ottoman Empire declared it would use a red crescent as its medical symbol in place of the red cross, as it claimed the cross was offensive to its Muslim soldiers. For this conflict, the crescent was temporarily, unofficially recognized.

To solve the issue of the religious disparities of the red cross and red crescent medical symbols, at the 2005 Diplomatic Conference in Geneva, the US proposed the red crystal as a third alternative health symbol. Not only was it designed to be devoid of any religious connotations, but it also allowed for organizations to place any other of the three medical symbols (such as the cross, crescent, or lion and sun) inside it. Over the following two years, this symbol was accepted and legally codified as part of the International Red Cross Red Crescent Movement.

Friedlander, W. J. (1992). The golden wand of medicine: A history of the caduceus symbol in medicine. Praeger.

The history of the emblems. (2007, January 14). Retrieved November 4, 2016, from International Committee of the Red Cross