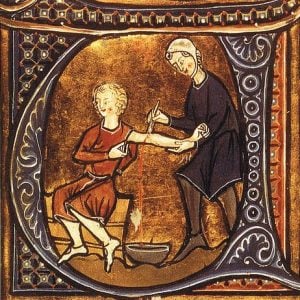 Bloodletting is the practice of draining blood from the body with the intent to heal a condition or symptom, widely employed by physicians throughout the Middle Ages. This practice covers a broad stretch of history, notably from ancient Greece into 19th century Western culture. Though the practice has been proven today to be harmful in the vast majority of cases, physicians throughout the ages purposefully drained blood from their patients as a form of treatment for many kinds of ailments, from asthma to cancer. For most of the time in which it was in use, the practice was questioned by only a minority physicians.

Below is a concise history of bloodletting across societies, both in medical and nonmedical contexts. Commonly repeated tropes surround bloodletting, such as the claim that ancient Egyptian physicians invented and/or practiced it, are dispelled as well.

It is commonly cited that ancient Egyptian medicine incorporated bloodletting, though no primary sources of such practices are actually known. A plethora of modern texts claim bloodletting can be traced back to ancient Egypt, but the majority of these cite each other, creating a spiderwebbing network of citations with no references to primary sources. With some effort, the earliest of these claims can be traced back to the Italian physician Prospero Alpini (1553–1617) in his work De Medicina Aegyptiorum.

In this multi-volume text, Alpini tells of his travels to Egypt and the medical practices he learned there. He makes the claim that Egyptian physicians had been practicing bloodletting since ancient times, specifically detailing a method in which the physician would make multiple horizontal incisions in the legs of the patient. However, Alpini provides no sources for such a claim. Alpini’s written works, including this one, make it clear that he was a staunch proponent of what he considered ancient Egyptian medicine, arguing its superiority over other methods – and texts about Alpini written by other authors confirm this apparent sentiment. However, he did not always provide sources for his claims regarding practices of ancient Egyptian physicians.

There are, in contrast, reliable sources regarding bloodletting in ancient Greek medicine, such as the writings of Galen (130–216 AD). Galen was a staunch proponent of bloodletting, though he did not blindly consider it a cure-all; his process took into consideration humoral theory as proposed by Hippocrates (460–370 BC). This theory put forth that the body consisted of four humors – blood, yellow bile, black bile, and phlegm – and that disease was the result of an imbalance among them.

Galen’s line of reasoning was that were there an imbalance among the humors, then in some cases the removal of blood would restore that balance. He also took into account other factors during treatment, such as the weather and the patient’s temperament (hot, cold, damp, or dry), because, for example, letting blood from a cold patient would result in a loss of warmth. His process was based in logic, though he and other physicians of the time were unaware that bloodletting was actually quite harmful for the vast majority of conditions.

As the field of medicine departed from the Hippocratic teachings of the four humors, bloodletting still maintained a grip among physicians. During the Middle Ages, it was one of the default recommended treatments for a wide variety of ailments, from acne to mental illness. Though there was some debate as to the efficacy of draining blood for many ailments, it was, for the most part, blindly administered.

As understanding of healthcare and medicine progressed through the Middle Ages, most physicians began to think of diseases and ailments in terms of symptoms rather than their underlying causes. As such, observable symptoms such as fever and swelling were the target of treatment. When bloodletting observably decreased symptoms like inflammation, redness, and high temperature, doctors took it as a sign of effective treatment. Naturally, under such beliefs, the practice was widely employed. That is not to say that bloodletting became any less dangerous – George Washington died in 1799 after having 125 ounces of blood drained to treat a throat infection.

As widespread understanding of disease moved to from symptomatic to causative (a philosophy adopted primarily due to the efforts of the 19th century Hungarian physician Ignaz Semmelweis), the use of bloodletting decreased overall. The practice, however, still remained in use to some extent by those faithful to what would later be labeled as traditional medicine.

Pre-Columbian Mayan culture is a prominent example of ritualistic, nonmedical bloodletting. In a ritual mirroring female birth, men of nobility would lacerate their genitals and induce hallucinations of deities or ancestors, believing this to be a sort of spiritual childbirth. In depictions of these practices, women are often seen alongside the men piercing and bleeding from their tongues or cheeks.

The Aztecs performed bloodletting in ritualistic settings as well. An illustration from the 16th century Codex Tudela, pictured to the right, depicts a scene of a human heart sacrifice. Below the alter, two men can be seen piercing and bleeding from the tongue (left) and ear (right).

Demarest, A. (2005). Ancient Maya: The rise and fall of a rainforest civilization. Cambridge: Cambridge University Press.