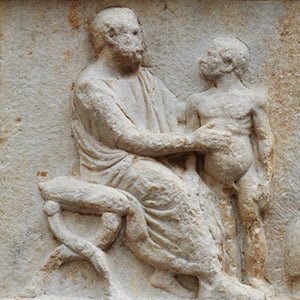 Ancient Greek medicine is a term that refers to healthcare practices and beliefs in ancient Greek culture. Its study can be divided into two primary developmental periods; pre-Hippocratic and post-Hippocratic. Pre-Hippocratic medicine, that is, before Hippocrates’ contributions in the 5th and 4th centuries BC, often focused more on spiritualism than empiricism. Though Greek employed the use of crude herbal remedies, surgeries, and sterilizations, diseases and other physical afflictions were typically attributed to the gods. As such, the physician’s primary duty was to make intercession for the patient, often praying to the gods for their healing.

Post-Hippocratic medicine is characterized by a turn to empiricism and scientific experimentation. This medical age was molded by the contributions of minds such as Hippocrates, Aristotle, and Galen, who rejected the ancient notion of divine intervention on physical health and instead looked to biology. Not only did contributions from these and other figures help forward medical treatment, but also the general understanding of the human body, allowing for more effaceable healthcare as Greek history progressed.

For further reading, refer to Greek medicine from Hippocrates to Galen: Selected Papers by Jacques Jouanna.

The Iliad, written during the 8th century BC and attributed to Homer, serves as a historical anchor for ancient Greek medicine knowledge and practices. When describing battle wounds, the text identifies many anatomical bodies, including specific muscles, bones, and organs. Not only are these body parts identified correctly, but the Iliad also denotes the lethality of these injuries. For example, head wounds are described as lethal while injuries to the limbs are not – though, of course, such elementary knowledge would be expected.

Homer also details some crude medical practices of the time. For example, one ïatros (physician) treats an open wound with a combination of goat cheese, barley, and warmed wine. Other passages detail the removal of arrowheads through basic surgical processes.

Though the Iliad exemplifies medical practices and demonstrates basic anatomical knowledge of the time, it also outlines the Greeks’ spiritual outlook with regard to various ailments. At the beginning of the epic, the angered god Apollo strikes the Achaean army with a disease using his plague-spreading arrows. This sickness is characterized as highly contagious and quickly fatal, rapidly infecting the entire army. Only after the army offers a sacrifice to Apollo does he calm down and remove the affliction.

Apollo’s arrows served as a symbol of disease and plague during this period, with exemplifies the Greek mindset with regard to causation of ailments. Though this was a common belief, there were some who contributed to the progress of medical knowledge even before Hippocrates’ time.

Thales (c. 624–546 BC), known for his contributions to mathematics, engineering, and geometry, contributed a biological theory that held its weight within ancient Greek medicine and healthcare for many centuries. He put forth that all physical matter was made of three basic elements, with the primary element being water. Water, he asserted, could be further separated into earth and air, and these three made up all organic life.

While this theory didn’t hold a large place within biology at the time, by the 6th century BC it had been adapted to four elements (the fourth being fire) and widely applied to medicinal practices. The four elements – fire, air, water, and earth – were associated with specific biological states; hot, cold, wet, and dry, respectively. Similar to theories within traditional Chinese medicine, Greek physicians at the time held that an imbalance among these characteristics could manifest itself as some sort of ailment within the patient. For example, a fever may have been attributed to an imbalance of fire and air within the patient.

Though this period served a stepping stone in the scientific study of biology, superstitious beliefs continued to inhibit its progress (though it seems by this period disease was no longer attributed to divine intervention). Specifically, Greek culture at the time held that the physical body and the soul were intertwined, and that after the death of the body, the soul would be reincarnated. These two beliefs in tandem led most to hold that trauma to the body affected the soul, and thus its ability to be born again. As such, purposefully cutting the body in life or death, both for surgery and autopsy, was discouraged. However, it should be noted that the elimination of this taboo was not the result of an elimination of religion, but rather a transformation of these beliefs over time.

Hippocrates (c. 460–370 BC) represented a culmination of the transition from supernatural causation to the natural within ancient Greek medicine, earning him the title of “Father of Western Medicine.” He was one of the first to attribute disease and ailments to natural causes such as environmental factors, including disease contracted from animals. He also took diet into account, identifying possible imbalances and deviances from standard Greek nutrition.

Hippocrates took the notion of balance among the four elements to another level with his humoral theory. He put forth that the human body contained humors; blood, yellow bile, black bile, and phlegm. He held that an imbalance among the levels of heat, cold, wetness, and dryness within the body would lead to an imbalance among the humors, leading to physical ailment. As such, humoral medicine revolved around balancing those four elements in an effort to balance the humors. The humoral approach to medicine maintained widespread use across many societies use until the 19th century.

In addition, Hippocrates’ use of prognoses (probable outcome based on the current diagnosis of the patient) and passive treatment presented huge bounds in ancient Greek medicine. Anatomical knowledge still did not progress very much, though, as taboo beliefs regarding surgeries and autopsies continued to hinder progress within the study.

While Aristotle (384–322 BC) didn’t contribute significant progress to ancient Greek medicine directly, his work had great effect on the development of Western medicine. He advocated empiricism and observation of phenomena within their natural habitats, primarily within the animal kingdom. His work resulted in massive progress in knowledge of animals and plant life, recording his discoveries in many books.

Though he primarily contributed to medicine indirectly, Aristotle did produce some theories regarding human biology that found homes in many great minds of the time. He put forth that there were three souls that could lie within any organism; a vegetative soul over growth and procreation, a sensitive soul over sensation and movement, and a rational soul over thought. He held that plant life contained only the first soul, animals the first two, and only humans all three. Though this theory was regarded as valid for some time after his death, by the 3rd century BC it was no longer widely accepted.

Galen (129–216 AD) was a Greek-born Roman citizen who contributed much to the medical field through his study of anatomy and herbology. Though human dissection was still not allowed at this period, Galen was able to learn much about human anatomy due to his position as a physician at a gladiator school, which frequently gave him access to patients with open wounds. Through these wounds he was able to observe muscle, bone, and other components of the human body, documenting his discoveries and forwarding the field of ancient Greek medicine. For example, he came to the conclusion that thoughts and senses were processed in the brain and that each hemisphere affected the opposite side of the body. He also discovered the importance of the spine, and that injuries to it could result in paralysis below the point of trauma.

Galen was renowned for diagnosing conditions with what was considered to be a high degree of accuracy, as well as treating the identified ailments appropriately. His experiments with minerals and plant materials provided him with plenty of knowledge in using these resources in treatment. As such, he was one of the first physicians to write out precise prescriptions for various ailments based on his diagnoses, paving the way for common methods used in modern Western medicine.