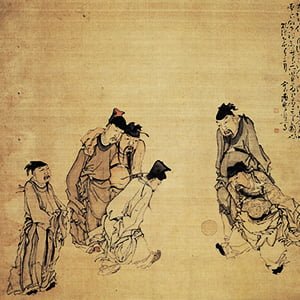 Cuju was an ancient Chinese sport with similarities to soccer, featuring several significant variations in scoring and play style. It was played in a rectangular field often defined by thread or low walls, with typically one or two goals positioned in the middle of the field. It was a very popular sport in medieval China, pervasive among all classes and enjoyed by intellectuals, peasants, royalty, and soldiers alike.

The sport enjoyed a reign of popularity for over a millennium, even spreading out from China into other countries, before fading away around the 16th century.

If you want to play cuju today, you’ll need a standard soccer ball (or, even better, an antique-style leather ball) and a custom goal. See Play Today! below for a full explanation.

Though the sport was likely played for some time prior, cuju’s earlier record lies within the 3rd century BC Zhan Guo Ce, a historical political textbook. China was the birthplace and primary home of the sport, though it appears to have even practiced in Japan, Korea, and Vietnam to some degree.

During the Song Dynasty (960–1279), cuju’s popularity exploded. From peasants to royalty, people of all classes enjoyed both playing and watching the sport. With cuju’s popularity as a spectator sport increasing, professional players were able to make a career out of it. Its scale during this period was perhaps comparable to the early history of soccer, though this trend did not continue. During the Ming Dynasty (1368–1644), cuju‘s popularity decreased sharply, played only by a comparatively small number of people.

The traditional style of cuju, called zhuqui, shared some similarities with modern soccer. Two teams of 12–16 players each attempted to score points by kicking the cuju ball through a goal. However, in contrast to soccer, there was one singular goal positioned in the middle of the field. This goal was made of two posts with a stretched net elevated between them, with a hole cut in the middle. Each team would try to kick the ball through this hole from their respective sides. Early in its history, there was also a two-goal version of cuju in which each team had their own goal in the middle of the field, though this was abandoned due to the popularity of the single-goal variation. It is unclear how many goals had to be scored to win a match or whether a time limit was used.

During the Tang Dynasty (618–907), another version of the sport, called baida, came into popularity, particularly among women. A group of 2–10 individual players would take turns attempting to score goals. A judge or judges would award points for skill, style, and ball handling, and could deduct points for poor performance. The player with the highest score by the end of the game won.

To play cuju today, you’ll need a ball (either a standard soccer ball or an antique-style leather soccer ball) and a goal. For the goal, get a volleyball set (or just the net if you already have poles) and cut a 2-foot diameter hole in the middle. If you don’t want to modify a net, mount a child-size hula hoop to two poles (duct tape will do) 5 to 8 feet off the ground. Once the goal is ready, set it up in the middle of your field.

Team Sport (Zhuqui): Set up two teams of up to 16 players each, one on each side of the field. The object of each team is to pass the ball through the central goal from their side of the field using any part of the body except the hands. Whenever the ball passes through the goal, the team whose side it came from scores a point. Either play to a set number of points or set a time limit like traditional soccer. At the end of the game, whichever team scored the most points wins!

(When in doubt, substitute the rules of soccer as need be.)

Contest of Skill (Baidi): This version of the game turns practice into a competition. Have any number of players take turns trying to score a goal while showing off their skills. Remember that you can touch the ball with any part of the body except the hands, so get creative!

A judge awards points for each goal based on how impressive the shot was (a scale of 1 to 5 points per goal works well) and deducts points for sloppiness. After a set number of attempts for each player, the person who scored the most points wins!

Players were allowed to touch the ball with any part of the body excluding hands. A referee could call fouls and/or deduct points, but it is unclear what constituted a foul, or how this system in its entirety worked.

Prior to the Tang Dynasty (618–907), cuju was played with a ball made of two sewn hemispheres of leather stuffed with feathers. As the sport gained popularity, a higher quality ball became the standard. With eight pieces of leather stitched together, the new cuju ball was much more uniformly shaped than its predecessor, and an air-filled animal bladder on the interior gave it a lighter weight for easier maneuvering.

This timeframe also established the goal setup that would become the standard for the following centuries. Typically, two posts would sit in the middle of the field with a net stretched between them with a hole cut in the middle, as illustrated to the right.

During the Song Dynasty (960–1279) cuju balls were crafted with twelve pieces of leather to further round its shape, and a professional standard weight of approximately 21 ounces was established. These improvements in the cuju ball quality and uniformity allowed for greater control of the ball among professional players.