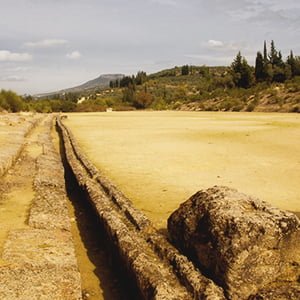 The ancient Greek stadium (stadion in Greek) was a place of religious and culture significance within Greek culture. They hosted Panhellenic festivals such as the Olympic Games, during which even warring city-states would enact temporary truces to compete together. They represented the celebration of health and athleticism within ancient Greek society, and as such, these stadiums were regarded with a level of reverence.

From the beginning of the ancient Olympic Games’ recorded history 776 BC, the stadion race was the only event held in the ancient Greek stadium. Beginning in 724 BC, other footraces and events were added. The diaulos and dolichos races were unencumbered races 2 and 18-24 stadia in length, respectively, and the hoplitodromos was an armored race typically 2 stadia in length.

A skamma, the Greco-Roman wrestling pit, would be prepared for these games by turning up an area of dirt using mattocks. This softened patch of earth would be used for the three combat sports – palé (wrestling), pygmachia (boxing), and pankration – and the long jump in the pentathlon.

The construction of stadiums throughout ancient Greece varied widely. The stadium at Olympia consisted primarily of a racetrack in an open field, seating on a natural hill to the south, and a stone platform for the judges (hellanodikai) called the exedra. The stadium at Delphi was renovated in the 2nd century AD and fitted with stone seats that could host up to 6,500 spectators. The Panathenaic stadium in Athens (for the Panathenaic Games as opposed to the Olympic Games) was remodeled entirely with white marble in 144 AD, with enough seating to hold 50,000 spectators. These stadiums likely featured a skamma, but the temprorary nature of these patches leaves no trace for archaeologists.

The racetrack itself was made of clay or dirt, watered and packed down to a firm surface. The start and end of the track were marked with a simple line, with some of the track extending beyond them for athletes to slow down after finishing. Some stadiums had a stone slab embedded in the ground at the starting line with grooves chiseled out for the athletes’ feet. A post was usually inserted in the ground just beyond the finish line for athletes to loop around if the race was more than one stadion in length (though it is debated whether each athlete had their own post or looped around the same one). This stadion track was defined as 600 Greek feet (pous) in length. However, as the Greek foot was not standardized, the stadion could vary in length from 177 m (581 feet) in length at Delphi to 225 m (738 feet) at Aphrodisias.