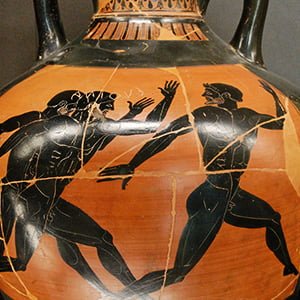 The stadion was a sprinting race held at three of the four Panhellenic festivals in ancient Greece; the ancient Olympic Games, Pythian Games, and Nemean Games. For the first 52 years of the ancient Olympic Games it was the only event, and afterward still maintained a position as the most celebrated event throughout the festival’s history. It was the first of four foot races featured in these Panhellenic games, the other three being the diaulos, dolichos, and hoplitodromos. In addition to being its own event, the stadion was one of the five competitions in the pentathlon, which was added to the Olympic Games in 708 BC.

This race was named after the Greek stadium in which it took place, leaving the impression that these stadiums were originally built for this event alone. To further support this, the track in the stadium was built only long enough for the stadion race, even after the introduction of longer footraces such as the diaulos. (For these races, the athletes would have to run back and forth on the track until a certain number of laps had been met.) All of this reinforces that the stadion was the foremost event in these athletic festivals.

The earliest historical reference to the stadion lies in the first recorded Olympic Games in 776 BC. As there may have been unrecorded athletic festivals before this, it is quite possible that the stadion predates this period. Indeed, other sports in the Panhellenic games are known to have predated the games themselves. (For example, ancient Greek boxing, which came to be known as pygmachia, can be traced back to Crete as early as 1650 BC.) However, without concrete evidence of the stadion race before this period, this is speculation.

The stadion maintained a prominent position in these festivals until their abolition in 394 AD under emperor Theodosius I. In the decades following his decree, all of the Panhellenic games slowly died out.

The stadion took place on a racetrack within the stadium. The length of track was defined as 600 Greek feet (pous), though since this unit was not standardized, the stadion could vary in distance by up to 150 feet. Measurements at archaeological sites vary in length from 177 m (581 feet) in length at Delphi to 225 m (738 feet) at Aphrodisias.

To begin, the athletes would line up at the beginning of the track, nude and barefoot, and take off at the signal of a nearby judge. The first to cross the line at the end would be awarded the title, bringing honor to their family and city-state. As the race was only one stadion in length, the athletes only had to reach the finish line to complete the race. They did not have to loop back multiple times as was the case for the diaulos, dolichos, and hoplitodromos races.