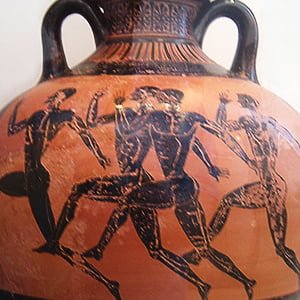 The diaulos was an ancient Greek footrace held at three of the four Panhellenic festivals; the ancient Olympic Games, Pythian Games, and Nemean Games. It was twice the distance as its predecessor, the stadion, though was otherwise identical. The athletes, customarily nude, would line up at the start of the stadion track, sprint to the end, turn around, and sprint back to the starting line.

Though the diaulos was a popular competition at the ancient Olympic Games, the stadion maintained its position as the foremost event.

Added to the ancient Olympic Games in 724 BC, the diaulos was the second sport to be featured in the games after the beginning of their recorded history in 776 BC. It was the second of four footraces to be eventually added to the games, the last two being the dolichos and the hoplitodromos.

The diaulos continued to be a part of the games until their abolition in 394 AD under emperor Theodosius I. In the decades following his decree, all of the Panhellenic festivals slowly died out.

The diaulos took place on a track called the stadion, located within the stadium. The length of track was defined as 600 Greek feet (pous), though since this unit was not standardized, the stadion could vary in length by up to 150 feet. Measurements at archaeological sites vary in length from 177 m (581 feet) in length at Delphi to 225 m (738 feet) at Aphrodisias.

The athletes would line up at the beginning of the track, nude and barefoot, and take off at the signal of a nearby judge. As the race was two stadia in length, the athletes had to complete two lengths of the track. After reaching the far end, the runner would loop around a pole called a kampter planted in the ground and finish the other half of the race. (It is unclear whether each competitor had his own kampter to loop around or if all competitors looped around the same one.) The first runner to cross back over the starting line after reaching the other side of the track won the title.