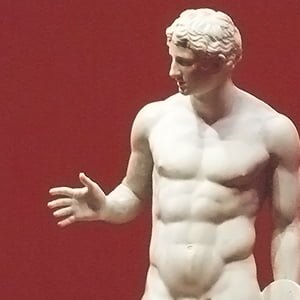 The pentathlon in ancient Greece was a multi-event athletic competition featured at three of the four Panhellenic festivals; the ancient Olympic Games, Pythian Games, and Nemean Games. The five sports that made up the pentathlon were the discus toss, javelin throw, long jump, stadion (a 200-yard sprint), and wrestling. The events always ended with wrestling, but the order of the other four varied among the Panhellenic games throughout their histories.

It is unclear how the overall victor of the pentathlon was determined. The most prevalent theory is that the top athletes would be selected based on the outcome of first four events, and these athletes would then compete in a wrestling tournament to determine the ultimate winner. There is also evidence to support that the winner of any three of the events would be crowned the overall winner of the pentathlon.

While Greek athletes who specialized in a specific sport, such as wrestling, were more proficient in their field, pentathletes were considered more well-rounded athletically and more aesthetically pleasing. Naturally, to exceed in all five of these events took tremendous athletic skill, and as such, these athletes were highly honored. Many Greek kylix paintings, such as those pictured further down, depict these pentathletes.

The pentathlon was first featured in the 18th Olympic Games in 708 BC, and the Pythian and Nemean Games followed at some point afterwards. The event maintained its presence in these festivals until their abolition under Roman emperor Theodosius I in 394 AD. In the decades following his decree, all of the Panhellenic festivals slowly died out.

The discus throw of the ancient pentathlon was similar to the modern version, though employing different technique and material. Athletes would throw a bronze disc typically weighing 4.4 pounds. Each competitor was allowed 5 attempts, and the longest distance of the 5 was used as their score. The 5 attempts likely held symbolic importance, aligning with the theme of fives within the pentathlon.

See Greek Discus for more information on the disc itself as well as throwing technique.

The ancient Greek javelin throw was much like its modern counterpart as well. Athletes would throw a spear about as long as the height of an average man. These weapons featured a small leather strap called an amentum, or an ankyle, which was wrapped from one end near the middle of the shaft and from the other around the athlete’s first and middle fingers. This end would slip away as the javelin was thrown, allowing it to fly away freely. The amentum enabled the athlete to propel the javelin over a larger throwing arc and spiral it through the air, resulting in a much farther throw than otherwise.

Some sources claim that there were two variations of the javelin throwing event: ekebolon and stockastikon. They claim that the contest of ekebolon was to throw the javelin as far possible, while stockastikon was an accuracy competition in which competitors attempted to land the spear as close to a target as possible. However, there is no known historical evidence to suggest the existence of this accuracy competition, whereas there is extant evidence for the distance competition. Like the discus throw, it is speculated that the athlete was allowed 5 attempts, after which the longest throw was recorded.

See Greek Javelin for more information on the throwing technique and the weapon itself.

The long jump, contrary to the indication of its name, was likely a series of 5 consecutive jumps. This assumption is based on recorded distances of the victors from various Panhellenic festivals, as any fewer than 5 jumps to reach these distances (such as the recorded 55 feet by Phayllos of Croton in the 5th century BC) would require near superhuman abilities. Athletes were allowed 5 attempts, after which the farthest distance was recorded as their score.

A vital tool and a symbol of the long jump was the halteres, which athletes used to gain extra momentum during their jump. See the referred article for detailed form and usage.

The stadion was a sprint named after both the stadium in which it was held and the track itself. This was the first sport to be featured in the ancient Olympic Games, and perhaps even before the beginning of their recorded history in 776 BC. Though the length of the stadion track was defined as 600 Greek pous, the actual length of such tracks varied among each stadium by up to 150 feet, as detailed in the full article linked below.

Greek wrestling, called palé, was the final event in the pentathlon. Competitors had to score three points via falls or submissions in order to win a match, with no break between scoring. The sport had two segments;  orthe palé (upright wrestling) and kato palé (ground wrestling). These matches would always begin upright and would sometimes be taken to the ground if a fall wasn’t scored, though it appears that this was fairly infrequent.