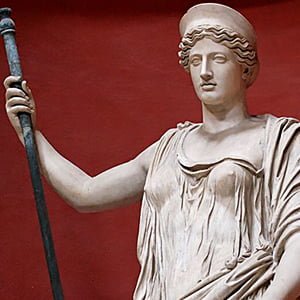 It is important to note there is almost no historical record of the Heraean Games. Currently the only source of information regarding this festival is a set of writings from the Greek geographer Pausanias (2nd century AD). In addition to detailing information from his writings, this article will point out which pieces of information are educated speculation and will dispel pieces of information that are commonly repeated but are unfounded.

The ancient Heraean Games were a series of athletic festivals exclusively for women, held in honor of the Greek mythological goddess Hera. Much like some of the Panhellenic games, the Heraean Games took place every four years. It is unknown at which point in the four-year Olympiad cycle these games took place, or whether the Greeks considered it part of the Olympiad cycle at all.

The Greek geographer Pausanias confirmed these games took place in the same stadium as the ancient Olympic Games. He reported that this stadium had a second track for women, which was 5/6 the length of the track used by the male athletes. As the latter track measured about 212.5 meters long (697 feet), the Heraean track would have measured approximately 177 meters long (581 feet).

Based on Pausanias’ descriptions of this festival, it seems that the Heraean Games only included running sports, much like the early stages of the Olympic Games. It is highly unlikely that these women competed in any combat sports such as pygmachia (boxing) or pankration. In addition, the pentathlon was likely not included due to its focus on palé (wrestling) as the climax of the event. As such, the events that may have been included are as follows:

The hoplitodromos is excluded from this list, as the average physiology of a young girl would have incredible difficulty sprinting while encumbered with up to 50 pounds of hoplite armor. In addition, the hoplitodromos was a military-themed event that may have been intended to help men train for combat situations, and thus would not have been relevant for the female athlete.

At the end of the competitions, the victors were awarded with a wreath of olive branches and gifted cow or ox meat that had been sacrificed the Hera. The Greeks believed that the victor would be endowed with strength upon consumption of the meat.

There are no reliable sources to provide a solid starting date for the Heraean Games. The legends concerning the origins of the games, as reported by Pausanias, are absent of any factual historical figures, which otherwise could have been used to estimate a date. All the characters in the legends are mythological, and thus can’t be used to accurately ascertain a possible beginning of the sport. We can make an educated guess that the Heraean Games began sometime after the start of the Olympic Games in 776 BC, since they both took place in the Olympic stadium.

There are no records to indicate an accurate date for the end of the Heraean Games. Educated guesses would put their end sometime during the first few centuries AD at the latest, as the Roman emperor Theodosius banned the Panhellenic games and other religious festivals in 393 AD.

Only women could compete in the Heraean Games; Pausanias specifies virgins. As opposed to competing in the nude like competitors in the male-only Panhellenic games, the women wore knee-length tunics that left the right shoulder and breast exposed, as pictured below. These tunics were typical garb for men performing physical labor, and as such these women competing in the Heraean Games were, in essence, dressing like hard-working men.