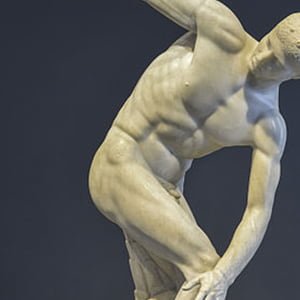 While widespread dedication to fitness is somewhat of a modern trend, exercise and general fitness practices have been employed by a number of cultures throughout history, most notably within Greek culture. Even without taking into account athletes who disciplined their bodies for peak performance at the Panhellenic games, many city-states encouraged every citizen to exercise in some fashion. Though ancient Greece is perhaps the most predominant figure in the history of fitness, general fitness has likely held a place in nearly every major culture throughout history. From the early development of yoga ancient India to intense mob football sports in medieval Europe, the history of fitness and exercise in its countless forms has been pervasive throughout time and place.

Some of our earliest solid records of exercise in antiquity lie in the Middle and Far East. Yoga, originating in India or somewhere nearby, is perhaps one of the oldest recorded forms of exercise recorded, likely practiced as early as 3300 BC (though its exact date and location of origin are uncertain). Since its beginnings, this discipline of both body and mind has branched out into countless forms. Though the history of yoga has consisted predominantly of forms focusing on mental and/or spiritual health, some forms, such as Hatha yoga, did have a focus on physical wellbeing.

The Persian zurkhaneh, a sort of gym dating back to the 4th or 5th century AD (with roots back to the 1st millennium BC), similarly exemplifies this discipline of both body and mind. This establishment hosted ritualistic weight training and calisthenics sessions, which involved lifting clubs, shields, and iron weights to the rhythm of a drum, and ended with a form of submission wrestling. Though the religious rituals were pushed away from Zoroastrianism toward Islam after the Islamic conquests of Persia beginning in the 8th century AD, zurkhaneh still exist today and serve as an observable shadow of an ancient piece of the history of fitness.

The ancient Far East also boasts another key entry in the history of fitness: the earliest record of exercise prescribed by a doctor. Suśruta (or Sushruta), a 6th century BC physician in India, is credited with the first documented case of a written prescription for exercise. He advised that daily exercise would improve certain aspects of bodily health, including muscle development, weight management, and digestive health. These records predate the recorded prescriptions of Herodicus (5th century BC), a Greek teacher of Hippocrates, who also prescribed exercise for recovery from sports injuries, though at a much higher intensity than Suśruta.

Ancient Greece is likely the most prominent figure in the history of fitness. During the peak of Sparta’s power and influence from around 800 BC to 600 BC, boys from the age of 7 underwent intense physical training to become warriors. This training involved fitness and combat practice in tandem with competitive athletic games, likely including ball sports like episkyros. Girls were made to train alongside boys in an effort to develop healthy mothers of warriors, though they did not participate in coed competitions. In Spartan culture, both boys and girls, men and women were expected to maintain a healthy diet and engage in athletic training as a duty to their city-state, adding to their reputation of strict discipline and a zealous drive for excellence.

This high esteem for physical education is easily seen throughout much of Greek culture as a whole. The Olympic Games (primarily 776 BC to 349 AD), one of the four Panhellenic festivals, were perhaps the pinnacle embodiment of this esteem. Undoubtedly, this competition is the most prominent in the history of fitness. Just like modern Olympic athletes, the participants in the ancient Olympic Games had to endure a long period of strenuous training in order to compete. On the first day of the festival, they were required to stand in front of the statue of Zeus at Olympia and recite a ritualistic vow stating that they had trained for at least 10 months before the games while maintaining a special diet.

Initially, the Olympic festival consisted only of the stadion, a sprint averaging 200 m (656 feet). Throughout the centuries, several other events were added. Below is a list of ancient Olympic events, in order of their introduction to the festival.

The Greek gymnasium, from which we derive the English word by the same name, was a bastion of physical education. Men over 18 were allowed to engage in athletic training within these institutions under the supervision and rule of the gymnasiarch, an official who oversaw all the training, games, and events at his institution. Facilities typically included a stadium, baths, and a palaestra, among other things.

The palaestra was an institution that served as a wrestling school of sorts, both independently and within a gymnasium, and was typically connected to a bathhouse regardless of whether or not the specific school was attached to a gymnasium. This school focused primarily on boxing and wrestling, and provided utilities such as punching bags, powders, oils, and various pieces of athletic equipment for its patrons. Many of the schools even had rooms for ball sports, such as episkyros.

The wide availability of training facilities was, in part, due to the belief that physical education and good health were part of a Greek citizen’s duty. In the 5th century BC, Xenophon attributed the following quote to Socrates, his teacher: “No citizen has a right to be an amateur in the matter of physical training. What a disgrace it is for a man to grow old without ever seeing the beauty and strength of which his body is capable.” Repeating a similar sentiment, Hippocrates, a 5th century BC Greek physician, wrote, “Eating alone will not keep a man well. He must also take exercise.”

The Roman philosopher Seneca the Younger wrote in a letter to Lucllius in the 1st century AD, “Now there are short and simple exercises which tire the body rapidly, and so save our time […] These exercises are running, brandishing weights, and jumping.” However, as Rome rose to power, the lavish Roman lifestyle likely led to a decline in fitness among nobility. Though physical fitness was still likely pursued by some, as evidenced by the continued existence of Panhellenic festivals such as the Olympic Games until the 4th century AD, this period of the history of fitness marked a decline in the Mesopotamian region.

While medieval European culture didn’t specifically advocate exercise for the sake of physical fitness, its fairly widespread practice of a variety of ball sports serves as an early example of one of the most popular forms of exercise in modern times. The most notable of these sports is the variety of mob football games played among many regions (including Irish caid, Welsh cnapan, and French la soule.). Practiced with different rules in each locality, these games involved playing fields expanding over miles of varying terrain, requiring competitors to run, jump, and climb over natural obstacles to get the ball to their goal.

In addition to the necessary endurance, agility, and dexterity required to move the ball across vast distances, competitors needed to possess a certain level of strength to navigate skirmishes. With most variations allowing the use of grappling and wrestling moves in close quarters, in tandem with the added chaos of up to several hundred players in one brawl (or up to one or two thousand in the case of cnapan), players were expected to be somewhat skilled in combat sports. Though ball sports have always required a certain level of athleticism, these sports were likely among the most violent and demanding in the history of fitness.