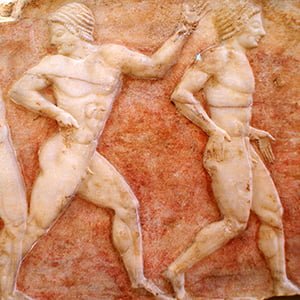 Episkyros was an ancient Greek ball sport with some coincidental similarities to American football. The sport involved attempting to move a ball past the opposing team’s end of the field, keeping it away from the other team by passing from player to player while avoiding tackles. It had a reputation of violence, though not quite as much as its Roman successor harpastum. Not all of the details of the sport can be made out in full due to its somewhat scarce records, though historians have been able to piece together some of its primary features.

If you want to play episkyros today, you’ll only need a mini volleyball and some small traffic cones. See Play Today! below for a full explanation of a non-violent modern rendition of the sport.

Harpastum was the Roman adaptation of episkyros, and as such, some of our knowledge of each sport is derived from information on the other. The two sports played similarly to each other, with harpastum being a sort of inversion of its predecessor (see How to Play under both articles for a comparison).

Episkyros was regarded as very physically exerting, requiring a great deal of strength and agility of its players. It was somewhat dangerous as well; with tackles and sporadic sprinting, broken bones were not too uncommon. The level of athleticism and exertion that was involved is likely comparable to American Football, perhaps with a higher risk of injury due to the absence of protective gear.

Educated guesses place episkyros’ Roman descendant harpastum around the 5th century BC, since any given sport would likely not be older than its host society. As such, episkyros itself would have been played for some time before then, though there is not enough information to determine how long that period was. The relief pictured above, which may picture the sport (though this is subject to debate), dates from the 6th century BC.

Due to some similar characteristics, some sources tie episkyros into the history of football and rugby, crediting this Greek sport as the first among their kind. However, there is no evidence to suggest such a connection. Similarly, some sources credit episkyros as a key figure in the development of soccer, often referencing the image of the Greek athlete to the right. In reality, this relief likely depicts some sort of exercise or game, as similar training methods are described in Galen’s Exercise with the Small Ball. No Greek or Roman records suggest that episkyros or harpastum were even similar to soccer, nor did they involve juggling the ball in the manner depicted.

As it stands, no solid evidence suggests that either of these sports influenced the development of the aforementioned football sports. The development of soccer, football, and rugby can be traced back to medieval European mob football.

Episkyros and harpastum were similar in that they both featured two teams of likely 12 to 14 players each. These teams would face each other in a field divided by a line in the center and another line a certain distance behind each team.

Records of episkyros suggest the goal was to get the ball past the other team’s zone as defined by the aforementioned lines on the ground, similar to American football. To score a point, the ball had to pass the opposing team’s back line. One source suggests that teams could coordinate to push an opponent holding the ball back over the line by force. Players would pass the ball among themselves over their opponents to try to keep this from happening, and likely to try to get the ball to the opponents’ side. While no known records state whether an athlete could carry the ball over the opponents’ line themselves (as in American football), it is likely this was allowed, as there would be no incentive otherwise for either team to pick up the ball.

To play episkyros today, you’ll need a mini volleyball (or another cushioned ball around the size of a softball) and some small traffic cones. Since the rules of this ancient game aren’t known in detail, here’s a fun, modern version (without the violence):

Find a soccer field or any other sports field with a line down the middle. If you don’t have access to one, use training cones to mark the corners of the field and some white field-marking paint to divide the area in half. Split up into teams of 12 to 14 players and have them stand on the back lines of their respective sides. At the sound of a whistle, both teams try to be the first to reach the ball placed in the middle of the field.

Since we aren’t sure of the rules of episkyros, the best way to play would be to adapt the rules of American football. The biggest change would be removing individual plays, letting the game continue without pause until a team scores or the ball goes out of bounds. The team with the most points at the end of two 30-minutes halves wins.

It is possible there was some sort of ball-contact rule that made it so any player from either team would have to be in contact with the ball as it passed over the back line in order to score. The absence of a rule like this would allow either team to score by simply throwing the ball far above the heads of the opposing team and past their back line. An issue with this theoretical rule, though, is that this would allow any ball-handling player being forced back over his own line to throw the ball behind himself in order to prevent the opponents from scoring. These issues make it difficult to ascertain the exact rules of the sport, as they are not recorded in detail. As it stands, this is only educated conjecture.

Documents regarding harpastum mention interceptions, fumbles, and tackles, and these were undoubtedly part of episkyros as well. Common tactics for both episkyros and harpastum included juking opponents by pretending to throw the ball in one direction and quickly throwing it in another, leading to the sports’ association with both deception and neck strain.