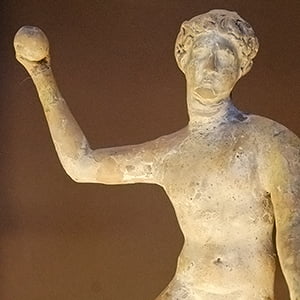 Harpastum was an ancient Roman ball sport with some similarities to American football. The sport involved two teams trying to keep the ball on their half of the field for as long as possible. This game was known for being quite violent, with records of occasional broken limbs and other injuries being not too uncommon. In fact, it appears that players were allowed to fight each other, using wrestling holds to incapacitate the opposing team. Not all of the details of the sport can be made out in full due to somewhat scarce records of these games, though we can still piece together some of its primary features.

Harpastum was the Roman adaptation of the Greek game episkyros, and as such some of our knowledge of each sport is inferred from information on the other. The two sports played quite similarly to each other, with accounts suggesting that harpastum was a sort of inversion of its predecessor. See How to Play under both articles for a comparison.

Records indicate that the level of violence in this game was greater than that of episkyros, likely due to the incorporation of wrestling elements. A similar pattern can be seen with the Greek form of boxing, pygmachia, which the Romans adopted and adapted to even bloodier means by attaching metal studs to their glove wraps. This appears to have been a trend in the ancient world; Roman society taking Greek spectator sports and raising their levels of violence.

If you want to play harpastum today, you’ll only need a mini volleyball and some small traffic cones. See Play Today! below for a full explanation of a non-violent modern rendition of the sport.

Due to its scarce documentation, it is difficult to determine harpastum’s date of origin. Since the game belonged to Roman culture, it likely would not have existed before the rise of the Roman Republic, putting its earliest probable appearance around or immediately before the 5th century BC.

Due to some similar traits, some sources tie harpastum into the history of football and rugby, crediting this Roman sport as an early predecessor of their kind. However, there is no evidence to suggest such a connection; this Roman sport and these later football sports have completely independent histories. The development of football and rugby can be traced directly back to medieval European mob football.

Harpastum and episkyros were similar in that they both featured two teams of likely 12 to 14 players each. These teams would face each other in a field divided by a line in the center and another line a set distance behind each team to mark the ends of the field.

Records of harpastum indicate each team’s goal was to keep the ball within their own zone as defined by the aforementioned lines on the ground – a sort of inversion of episkyros. Players would pass the ball among their teammates in an attempt to keep it within their own zone while holding back the rivaling team. An opposing player could snatch the ball away and try to throw it back to their own zone, though this could be intercepted.

While records suggest the goal of each team was to keep the ball within their own zone, it is unknown how points were tallied. It is possible they were awarded based on time kept by a referee, or perhaps earned after a certain number of passes within the zone. With the information currently available, it is not feasible to come to a solid conclusion on the scoring system.

Documents regarding harpastum< mention interceptions, fumbles, and tackling. Common tactics for both episkyros and harpastum included juking opponents by pretending to throw the ball in one direction and quickly throwing it in another, leading to the games’ association with both deception and neck strain.

To play harpastum today, you’ll need a mini volleyball (or another cushioned ball around the size of a softball) and some small traffic cones. Since the rules of this ancient game aren’t known in detail, here’s a fun, modern version (without the violence):

Find a soccer field or any other sports field with a line down the middle. If you don’t have access to one, use training cones to mark the corners of the field and some white field-marking paint to divide the area in half. Split up into teams of 12 to 14 players and have them stand on the back lines of their respective sides. At the sound of a whistle, both teams try to be the first to reach the ball placed in the middle of the field.

To score points, players must pass the ball among their teammates while on their own side of the field. Every time a player catches a pass from any other player while standing on their team’s side, a point is scored. Players may touch the ball with any part of the body, but only passes thrown from the hand can score points. The players may choose to verbally indicate caught passes to help the scorekeeper keep track (for example, by shouting “caught!” on every received pass). Passes intercepted while on the opposing team’s side of the field don’t score any points.

For every 10 seconds a single player has possession of the ball without passing, one point is docked from his team’s score. (Have a referee with a stopwatch keep track.) If the ball goes out of bounds, play stops and it is thrown back in soccer-style by the team that did not touch it last. (The throw-in does not score any points.) The team with the most points at the end of two 30-minutes halves wins.