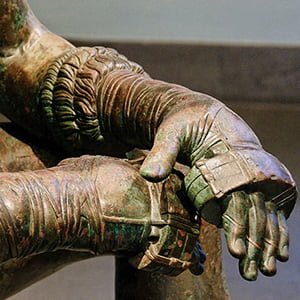 Greek boxing equipment underwent a few stages of development throughout the history of Greek boxing (pygmachia). For a great period of time before the 5th century BC, Greek fighters wore protective ox hide leather wraps called himantes around their hands, knuckles, and wrists, as well as sometimes around their chests.

Sometime in the 5th century BC, these fighters began wearing a type of hand covering called oxys, which were made of thicker leather that wrapped from the knuckles up to the forearm and attached to a band of fleece likely used to wipe sweat and blood from the boxer’s eyes. Boxers would often use leather with sharp edges in order to break their opponent’s skin when striking.

Toward the end of the 5th century BC, a more protective wrapping called sphairai, which were lined inside with shock-absorbent wool, came into popular use for training. Oxys were difficult to use in training and non-competitive environments because of their design to inflict injury, so sphairai were invented to allow boxers to practice with full force and far reduced chance of injury. Oxys were still used for competitions, and maintained their popularity until the 3rd century AD. Aside from the boxing equipment detailed above, boxers wore no other gear and fought in the nude.