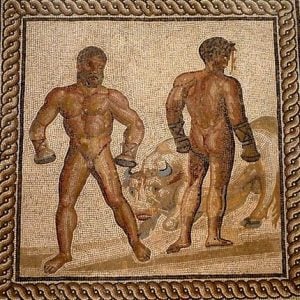 The history of boxing stretches back thousands of years, beginning as early as the 16th century BC in ancient Egypt. It was a popular sport enjoyed by a small range of cultures (primarily in the Mesopotamian region) over several millennia, giving the sport a rich history. However, it appears that after the fall of the Roman Empire, boxing disappeared completely for some time. There are no historical records during the Middle Ages – Mediterranean, European, or otherwise – that suggest the sport was practiced to any great extent. It wasn’t until the 17th century that it finally reemerged, this time in England. Boxing boasts a much wider audience today, practiced and spectated by many societies all over the world.

Below is a concise history of boxing, focusing on its origins and practice in ancient history and its revival beginning in the 17th century.

Several ancient Egyptian tomb paintings, such as those in the tombs of Merry-Ra and El-Minia, depict what clearly seem to be boxers. References to similar sports in antiquity, such as the grappling match in the ancient Mesopotamian text The Epic of Gilgamesh, in combination with these tomb paintings suggest that combat sports such as these were not uncommon in ancient Egypt. Though there seems to be a lack of historical documents detailing the sport, there are shadows of its existence in this region.

However, boxing in ancient Egypt appears to have not always been competitive. The tomb of Kheruef, an 18th dynasty king, bears illustrations of a boxing match that appears to only be part of a ritual – something akin to a religious performance. Each boxer in these illustrations appears to represent a deity; one of them Horus and the other the evil god Seth. As Horus prevails over Seth in ancient Egyptian mythology, the boxer representing Horus here prevails over the one representing Seth, as would be expected in such a ritual. This does not disprove the existence of competitive boxing in ancient Egypt, but does raise questions as to its popularity.

Evidence of fistfights, most likely in competitive settings, exists in ancient Crete as early as 1650 BC. This Greek boxing sport was given the name pygmachia at some point and was added to the Olympic Games during the 23rd Olympiad in 688 BC. In addition to the Olympic Games, it was later featured in the Isthmian, Pythian, and Nemean Games. Pygmachia was an immensely popular sport in ancient Greece, enjoying a lifespan of what was likely over a millennium.

In this Greek entry in the history of boxing, competitors were completely nude except for strips of leather wrapped around their wrists, called oxys. Not only did this protect their hands, but the sharp edges of the cut leather would slice and gash the face of the opponent. The athletes would fight without pause until one of them gave up, was incapacitated, or was killed. Naturally, this made pygmachia a much more bloody and violent sport than modern renditions of boxing, though deaths were apparently not very common.

With a great amount of crossover in Greek and Roman culture, the Romans adopted pygmachia and modified it to even more violent ends. The leather hand wraps used by Roman boxers had metal studs attached to them – typically made of lead or iron – to inflict even more trauma on the opponent. Besides this violent addition, Roman boxing was apparently functionally similar to pygmachia. Both fighters would typically continue until one was incapacitated, though with the introduction of such brutal hand wraps, deaths in the pit were more commonplace.

With the decline and fall of the Roman Empire, the history of boxing took a long pause. While it is possible the sport was adopted elsewhere, the lack of evidence suggests that sportive boxing was, for the most part, forgotten during the ensuing centuries.

The history of boxing takes another rise in 17th century England, though the reason behind its resurgence isn’t clear. It’s quite possible that sportive fistfights in their simplicity began to develop independently of past practices. The absence of hand wraps and gloves in this period would support this as well, as the sport’s earlier renditions typically featured wraps of some kind. Despite this, it is possible that boxing had spread from Greco-Roman culture into Europe during the Dark Ages and this either went unrecorded or such records have yet to be discovered.

Regardless, the newly revived sport of boxing began to increase in popularity throughout England. In 1723, King George I even commissioned a public boxing ring to be built in Hyde Park, London. In the following decades, sets of rules for the sport began to be established. As it continued to be more widely practiced, boxing spread to the rest of Europe and even to the United States, where it picked up quite a following and continued to evolve.