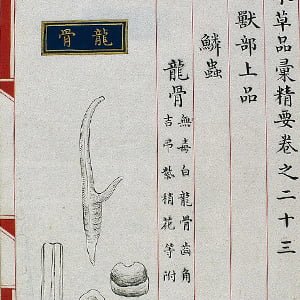 The Herbal Classic of Shen Nong (Shen Nong Ben Cao Jing) is a historical Chinese text on herbalism and medicine, thought to originate in the 3rd century AD. The text is attributed to the mythical deity farmer Shen Nong (or Shennong), translated “Divine Farmer,” said to have lived around 2800 BC. Chinese legend credits him with experimenting on himself with many kinds of herbs, recording his findings in this text. The text continues to hold a level of significance among modern practitioners of Traditional Chinese Medicine.

There is an apparent disagreement between this work’s date of origin and the text’s attributed author (disregarding Shen Nong’s mythical nature). It is likely that the information in this text had been passed down through oral tradition until the 3rd century AD, by which point it had been attributed to Shen Nong. As such, its historical author is unknown.

The Herbal Classic of Shen Nong lists 365 substances with their descriptions and medicinal uses, with every item categorized into one of the following six classes: minerals, herbs, woods, animals, fruits and vegetables, and cereals. Additionally, items are categorized by the following three grades of quality: noble, middle, and inferior. The text puts forth that its 120 noble substances are non-toxic, viable for long-term usage and disease treatment, and effectual for longevity. Its 120 middle substances range from nontoxic to mildly toxic and are advised for treating ailments and expelling pathogens, though they are not recommended for long-term usage. Its 125 inferior substances are classified as toxic to highly toxic, sometimes violent and dangerous, and are advised for infrequent usage in low doses.

The entries in the Herbal Classic of Shen Nong elaborate on the taste and warmth of each ingredient. The four levels of warmth referred to are cold, cool, warm, and hot, and the five flavors are sweet, sour, bitter, salty, and acrid (powerfully unpleasant). These two characteristics, the text claims, indicate the type of ailments and symptoms for which they should be administered. For example, a fever would indicate the usage of a cold or cool substance, such as talcum or black sesame.

As an example, the table below displays a few of the substances in the book, organized by grade and material.

*The entry for mung beans is the only inferior-class cereal.

Much like other ancient Chinese medical texts (such as the Compendium of Materia Medica and Cold Injury Treatise), the majority of the ingredients listed in the book are still in use in Traditional Chinese Medicine today, though not all of them have been identified and translated. Some of these ingredients have been shown to have some level of efficacy in medicinal practice, sometimes even matching the recommended usage in the text, though many of them have been proven to be ineffective or even harmful in medicinal use.