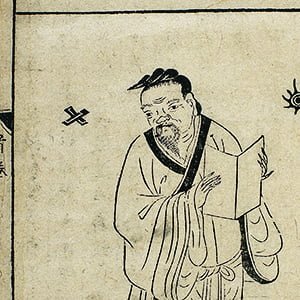 The Cold Injury Treatise (Shang Han Lun) is a prominent Traditional Chinese Medicine textbook, surpassed perhaps only by the Compendium of Materia Medica. This two-volume work has been translated, copied, and retranslated down through the centuries, leading to a small collection of titles by which it’s known in several languages (such as Shang Han Za Bing Lun and Treatise on Cold Damage Disorders). It is one of the oldest and most complete medical textbooks available today, boasting 398 entries regarding origins and treatment of ailments with 113 herbal prescriptions.

The text was written by Zhang Zhongjing, a renowned Chinese physician who lived from approximately 150 to 219 AD. He is often credited among practitioners of traditional Chinese medicine to have been one of the most important and influential physicians to ever walk the earth.

Zhang Zhongjing explains in the preface his motivation for compiling the work. He lived in a climate of widespread death and disease – even two-thirds of his extended family had died prematurely by the time of his writing. To combat the bleak situation, he committed to writing a complete medical guide, compiling what he had learned in his career along with information within textbooks available to him. As a result, this text serves as a summation of available work at the time, passing down information from other ancient Chinese texts lost to us. However, since Zhang Zhongjing’s intention was to release an efficient, practical handbook to save lives, he doesn’t attempt to explain the mechanisms and theories behind the workings of the treatments and recipes.

Because of the lack of explanation behind the theories of the treatments within, in tandem with the text’s numerous potential errors throughout its many manuscripts and retranslations, there is some conflict in the modern Traditional Chinese Medicine community between those who follow the book unquestioningly and those who attempt to identify mistranslations and test the efficacy of treatments. Regardless, Cold Injury Treatise remains one of the most highly regarded texts in the community overall, and is required reading to become a practitioner of Traditional Chinese Medicine.

Cold Injury Treatise splits the origin of disease into the following three categories: external sources, internal sources, and sources that are neither. External sources may be better described as environmental, as they primarily consist of excess environmental stress placed on the body from things like cold, dampness, or wind – along with pathogens and the like. The text claims that external sources cause 70% of all ailments. Internal sources include things such as poor diet, unhealthy lifestyle, and emotional trauma. Ailments form these sources are told to be much more complex and difficult to treat. Finally, some sources can’t be clearly defined as either, such as spoiled foods and poisons.

The first volume covers ailments from external sources, as well as their treatments. The second volume details ailments from internal sources and those from neither external nor internal sources. However, Cold Injury Treatise approaches treatment of these ailments in a unique way. Rather than attempting to name every disease known to man, it details treatment based on the source of the sickness and the symptoms of the patient (such as sweating, weak pulse, headache, or cold skin). This system allowed for treatment of diseases that had yet to be discovered at the time.

Cold Injury Treatise operates on a principle of six yin and yang layers of the body. It puts forth that ailments from external sources would start at the outermost layer with potential to penetrate into deeper layers, and that penetration into those deeper layers would result in more potent symptoms and greater difficulty expelling the disease. Ailments from internal sources would have the potential to manifest themselves in any layer, or even multiple layers simultaneously. The layers are listed below in order of outermost to innermost.