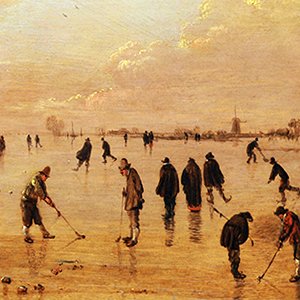 The history of golf reaches back into the Medieval ages in Scotland, and, perhaps, the Netherlands and China. While sports fairly similar to modern golf can be traced back to the Netherlands in the 13th century AD and to China in the 10th century AD, there is great debate as to whether they have any relation to the actual history of golf. Golf itself can be traced directly back to Scotland as early as the 15th century, though whether the sport truly originated there or with another sport further back in history is discussed below.

Chuiwan was a Chinese sport strikingly similar to modern golf. Early murals and literary references to the sport reveal that the aim of the game was to use a club to strike a ball into a target. References to the game from the 10th century suggest the ball was rolled into a shallow dish initially, but by the 11th century small holes in the ground replaced these dishes. Murals of the sport, such as the one below, typically show a scale much smaller than that of modern golf – perhaps comparable to mini golf.

The sport fell out of practice sometime around the 15th century. Perhaps coincidentally, this is the same period around which golf first appears to have been commonly played in Scotland. Given the striking similarities between the two games, there is a possibility that chuiwan was brought from China after European contact. With Scotland’s spacious fields, the game’s natural evolution would have been an increase in its scale from the comparatively small spaces in chuiwan. However, without hard evidence of a connection between the two sports, these theories are only speculation and subject to much debate.

Kolf in the Netherlands

A game with characteristics similar to golf, played in the Netherlands as early as the 13th century, was the sport kolf (or kolven as a verb). Players wielded iron-headed clubs with wooden handles with which to strike a ball toward a target – typically a stake but sometimes a hole – in as few strokes as possible. Kolf was often played on frozen bodies of water during the winter, particularly frozen lakes. Like chuiwan, the game was often played on a small scale, though it was occasionally played over greater distances in open fields, similar to golf.

The correlations between kolf and golf – their similar names, the use of clubs to strike a small ball, the holes for targets (at least in some instances), and the cross-country games – would heavily suggest the two sports are related. Despite this, there is still great debate over their connection, primarily over the claim that kolf played on ice bears more similarities to ice hockey than golf. As such, the history of golf may have connections to kolf in the Netherlands, though golf may have developed in Scotland independently as well, with or without the influence of chuiwan.

Golf in earnest can be traced directly to Scotland as early as the 15th century. The earliest literary reference to the game is a 1457 prohibition of golf, along with football, issued by the Scottish Parliament on the claim that these sports were inhibiting national defense – specifically interfering with archery training. By all early accounts of medieval golf, it seems the game was quite the same as modern golf. The debate as to its origins lies primarily with its ties – or lack thereof – with kolf and/or chuiwan. The general consensus is that some of the principles behind golf in Scotland may have been influence by kolf, but that golf itself developed independently for the most part.

Hongling, L. (1991). Verification of the Fact that Golf originated From Chuiwan. The Australian Society for Sports History Bulletin.