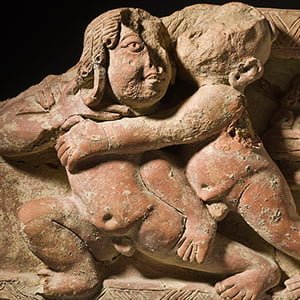 Malla-yuddha (the Anglicization of a multilingual word meaning “wrestling combat”) was an ancient form of wrestling originating in South Asia. Its popularity among all classes over more than five millennia lent it a rich cultural history. Incorporating techniques used in grappling, boxing, wrestling, and some martial arts, it was a highly variable and very entertaining combat sport.

Malla-yuddha was split into four standard variations, though some of the details regarding those variations have been lost. One form involved unrestrained combat (similar to the ancient Greek sport pankration), allowing for striking, choking, and even biting with no restraint. The other three varied in levels of violence and scoring methods, allowing for safer play for the layman. See Objective further below for details on the four variations.

The first literary reference to malla-yuddha itself lies in the Mahabharata, an ancient Indian epic dating from the 5th century BC (although the original copy likely dated back as early as 9th century BC). However, wrestling in general in South Asia, and likely a form malla-yuddha itself, is linked back to at least the 3rd millennium BC. Badang, a legendary Malay folk hero of oral tradition, is said to have practiced malla-yuddha, though the period in which his legend is set is unspecified.

Before the Muslim conquest of India between the 12th and 16th centuries AD, malla-yuddha was enjoyed among all classes, from kings to peasants. Opposing kings would sometimes pit royal wrestlers against each other in lieu of war and other conflicts. Even kings themselves would occasionally engage in matches.

Royalty and nobility would host public tournaments within palace courtyards throughout thus period, often offering a large monetary prize to the winner. These tournaments brought in both casual and professional competitors from the surrounding areas. Sometimes the rich would hire professional wrestlers in an attempt to draw in more of a crowd. These events were highly celebrated and featured performances from other arts as well.

Though there were many casual wrestlers, the spectator sport was dominated primarily by professional wrestlers. These athletes devoted their lives to malla-yuddha, often living in an institution called an akhara and training under the supervision a guru. They were to follow a strict training regime and abstain from alcohol and sexual contact to keep their bodies pure and optimally primed for their profession. Sometimes royalty or nobility would serve as patrons for one or several wrestlers, funding their lifestyle and careers.

The sport’s popularity faded out throughout most of South Asia by the 16th century, though it still persisted in some areas to the south.

The scoring system varied among the four forms. Within one variation, falling an opponent or forcing a submission scored a point. In another, the wrestler had to lift the opponent off the ground for a full three seconds. Within its most violent form, the goal was to fight until submission or inability to continue (such as unconsciousness). The difference in scoring within the fourth variation, if any, is unclear.

Before the match began, the wrestlers had to perform a set of activities to prepare. They were to flatten and pack down the dirt in the wrestling pit, throw dirt on themselves and each other (partially for a better grip), offer a prayer, and touch their heads to the feet of the guru as a sign of respect. After these preliminary activities, the two could meet in the middle of the pit.

The starting position likely varied based on which of the four forms of the sport they were engaging in. At least one form began with the wrestlers grabbing each other by the waist with their chins resting on the other’s shoulder.

Beyond the four forms, malla-yuddha was divided into four technical styles of fighting (not to be confused with the four variations of the sport itself). Each of them was named after a different legendary figure from the Indian epic Mahabharata, suggesting these styles weren’t codified until the 9th century BC. The four styles are as follows:

Each variation featured different restrictions. While biting was allowed within the most violent variant, it likely was allowed not among the other three. The same was likely the case for strangleholds and other violent moves, though these details have not been clearly recorded. The guru likely intervened if he witnessed any rule violations.

Wrestlers of malla-yuddha were divided into classes by criteria such as age, size, and strength. Whether their strength was only judged or actually tested before classification is unclear.

Peterson, I. V. (2003). Design and rhetoric in a Sanskrit court epic: The Kirātārjunīya of Bhāravi. Albany: State University of New York Press.