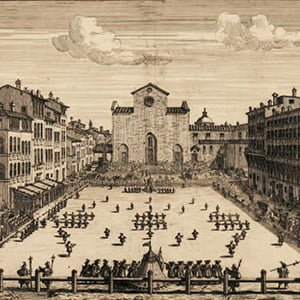 Calcio fiorentino (translated from Italian to “Florentine kick” or “Florentine soccer/football”) was an Italian ball sport with elements of soccer, handball, and rugby. It was played from the 15th century (possibly earlier) to 1739, the year the last game, dubbed ultimo calico, took place in Florence. Calcio fiorentino was enjoyed primarily by the upper class – especially so by the House of Medici, the Italian royal family of the era, which came to be the primary influential figure behind the sport.

Though much older than soccer, calcio fiorentino’s basic format is similar to the former, with two teams attempting to pass a ball through the opponents goal (though, in calcio, the goal was simply a barrier that the ball had to pass over). Aside from this, these two games bear few similarities. For one, in addition to kicking the ball, players were allowed to hold it with their hands and throw it. In addition, calcio fiorentino involved a much higher level of violence than soccer. With 27 men on each team, these games were perhaps comparable to small military battles, requiring strategy to move the ball past the opposition. Players reportedly acted quite violently sometimes, with heated fights occasionally breaking out on the field. Pikemen were often situated on the sidelines to break up such disputes before they got out of hand.

As the game was enjoyed primary by nobility, calcio fiorentino had somewhat of a reputation of vanity. In addition to the athleticism and aesthetic physique typical of an athlete, athletes were expected to be beautiful, graceful, and well dressed. The focus on this aspect of the game is somewhat reflective of the nature of the Renaissance era in which it was cultivated.

The earliest reference to a game that may have been calcio fiorentino lies in a poem written by Nicholaio Ritaliatore in 1410. Other literary references to the sport directly are scattered throughout the 15th to 18th centuries, during which calcio enjoyed its peak popularity. Noblemen would play games in public squares with seating for spectators to watch, often hosted by the Medici family to celebrate special events such as marriages. The game was held with such high regard during this period that a law was passed in 1606 that any bystander who interrupted an official game in Florence would be flogged.

Calcio fiorentino’s fate was closely tied with the Medici family. When the last Grand Duke of the Medici, Giovanni Gastone, died in 1737, the game experienced a sharp decline. The final sanctioned match, the ultimo calico, was held in 1739. The sport underwent somewhat of a revival over 150 years later in 1898, though this rebirth led to a much different game, as detailed in Modern Revival further down.

The small range of treatises on calcio fiorentino from the 15th to 18th centuries have allowed for a fairly complete recreation of the rules. The game was played on a sand court twice as long as its width, typically around 260 ft. x 130 ft. The two teams were comprised of 27 players each, and the goal of each team was to pass the ball over the opponent’s back barrier, called the caccia. Players were allowed to kick, hold, and throw the ball. As a method to incapacitate the opposing team and move the ball past them, players were allowed to grapple with each other. At the end of the match, typically 50 minutes in length, the team with the most goals would be declared the winner.

Calcio fiorentino underwent a revival beginning in 1898. It may be more accurately described as a reinvention, as the game that was born in 1898 under the name of calcio fiorentino was not the same as the Renaissance era calcio fiorentino. By the end of the 19th century, the development of soccer (association football) throughout Europe was well underway. The growing popularity of this sport appears to have heavily influence the reinvention of calcio, leading to the creation of a new game entirely.

In a twist of irony, this Renaissance sport that may have contributed to soccer’s development (calcio) was reinvented within the parameters of that same game it helped mature (soccer). This new calcio continued to evolve throughout the following century and is still played today. However, it is clear that modern calcio fiorentino is not its ancestor. For example, the goals now feature a net, whereas in the original game the goal was a fence over which the ball had to be passed. In addition to the soccer influence, this new sport focuses heavily on hand-to-hand combat. The masses of players wrestling, grapple, and box with each other to wear down the opposing team. None of the accounts of the original sport suggest there was such a focus on this aspect of the game.

Merkel, U. (2015). Identity discourses and communities in international events, festivals and spectacles. Springer.