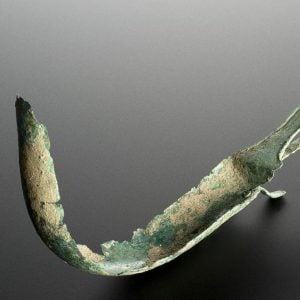 The strigil was an ancient Greco-Roman tool used to scrape oil, dirt, perspiration, and other contaminants off the skin. This cleaning tool was often depicted in ancient Greek amphora and kylix paintings alongside athletes, leading to an association between the tool and Greco-Roman athletics. Athletes would coat themselves with olive oil before training in the gymnasium or palaestra, then use a strigil to scrape off the oil and dirt before entering the baths.

The strigil was made of metal, typically bronze, and was shaped similarly to the letter “J,” with a looped handle at the top. The curved end was typically broader and molded into a concave shape to scrape foreign matter off the skin. These tools were typically less than a foot in length, and sometimes bore an inscription of the owner or maker’s name.

It is not to be misunderstood that the strigil was used in lieu of soap or bathing. It was typically used to remove foreign matter before washing off with any combination of a bath, sponge, and soap.

The strigil is most commonly depicted in athletic contexts within Greco-Roman art. Men would coat themselves with olive oil before athletic activities, partially for aesthetic reasons, and dirt would build up on their bodies as a result. Competitors in palé (wrestling) would purposefully throw dust over their oily bodies, partially to increase the grip of the otherwise slippery skin of the opponent. After their athletic activities, these men would have to scrape these substances off their bodies. The scraped residue was believed to have healing properties, so it was often saved for later use in medical salves.

Though most often depicted in sportive contexts, the use of the strigil was not restricted to removal of oil on athletes. For example, the ancient Greek text Problems, attributed to Aristotle, refers to using the strigil to scrape sweat off presumably unanointed skin. It may be the case that this tool was routinely used before bathing regardless of whether the skin had been anointed with oil. The modern association between oil-coated athletes and the strigil may be due to the presence of the latter in many ancient illustrations of these athletes.

Similarly, these depictions of the strigil almost exclusively feature men, which may lead some to believe that only men used these tools. However, there is strong evidence that women used strigils as well; for example, tomb excavations have found strigils among women’s possessions.

Sansone, D. (1992). Greek Athletics and the Genesis of Sport. University of California Press.