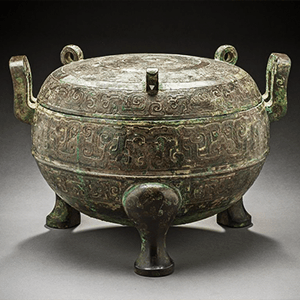 The ancient Chinese ding was a three- or four-legged bronze cauldron with heavy religious and cultural significance. Their production and use started to spread throughout China during the Shang dynasty in the 2nd millennium BC, and continued at some level until the 1st millennium AD.

Ding were originally used for food storage, cooking, and ritualistic sacrifices. Toward the end of the Bronze Age, they came to symbolize power and authority, and were often kept and displayed by members of nobility as signs of such. Royalty and members of the upper class would be buried with various numbers of ding after death as a sign of their importance in life. For example, kings would be buried with nine ding, a number which no other member of nobility was allowed to exceed.

Chinese martial artists during the Warring States period (475–221 BC) would sometimes perform lifts of ding, which could often weigh up to several hundred pounds. As these cauldrons typically had two handles, either one or two men could attempt the lift. The shape of the cauldron would have necessitated that the lifter(s) perform some sort of “sumo” lift (as per modern terminology), spreading their legs out to the sides to protect their knees.

With one person on each side of the ding, the lift would fairly closely mirror the modern sumo deadlift, though because the handles would not be at ground level it would only replicate a top portion of the full range of motion. Provided the lifters used proper body mechanics, this would be a fairly safe lift. With only one person lifting the cauldron alone, however, it would be a much more difficult lift even before taking into account the increased load. The positioning of the handles bisecting the standard ding would necessitate that the lifter lean forward significantly to pick it up, which would put the spine in a position of risk. It would be very difficult to maintain safe body mechanics and avoid back rounding when lifting from this position. Even with the back slightly arched, the fact that the center of gravity would be sitting much farther forward than during a standard sumo deadlift would expose the spine to a greater risk of injury. A single lift would have a relatively low chance of permanent injury, but a martial artist who frequently attempted solo lifts would likely have been prone to back injury.